The 1968’s Singapore Employment Act was the first labor legislation that controlled the interactions between the workers in an employee and recruiters. This act was majorly put into use to retain good working standards and provide a secured working space for the workers. 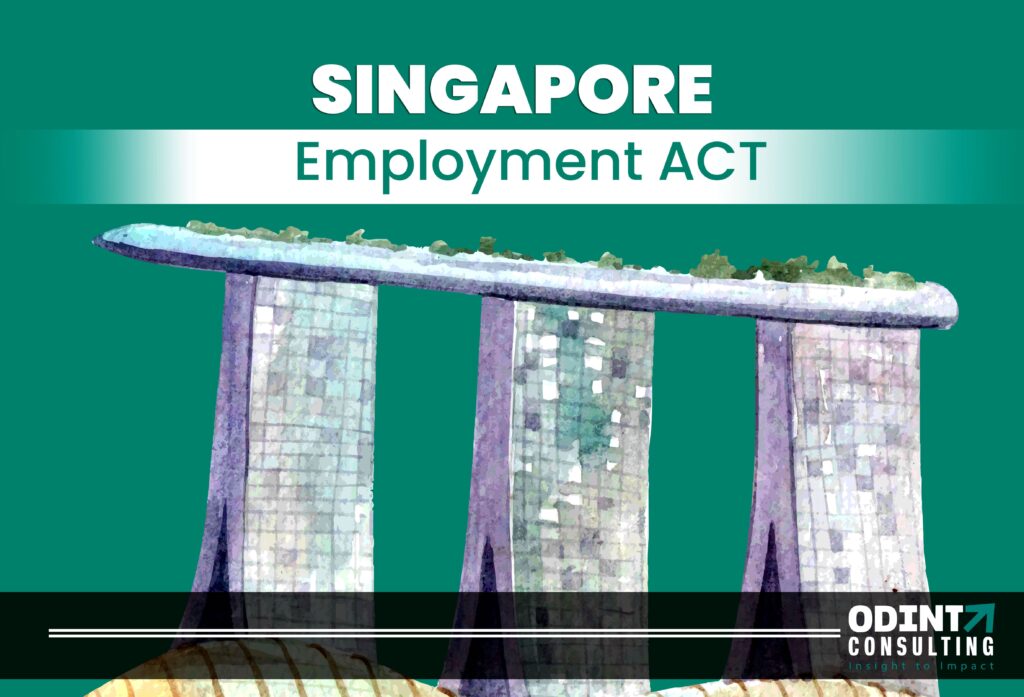 The 1968’s Employment Act was the first labor legislation in Singapore that controlled the interactions between the workers in an employee and recruiters. This act was majorly put into use to retain good working standards and provide a secured working space for the workers. The Singapore Employment Act is valid for the whole employment procedure. From the first step of hiring an employee to its termination or dismissal.

These labor laws are not only fair but also business-friendly and efficient. As per the report of 2015’s Global Competitiveness, Singapore stands at the 3rd position in the world for having the most efficient employer-labor relations. These provisions related to employment are necessary and a major area of official compliance needs that the firms in Singapore should follow. All corporations and employers there should follow these laws while recruiting, dismissing, and managing workers.

The employer should properly decide all the terms & conditions of the work contract in agreement with the guidelines of the employment law. In this article, we will give you an elaborate idea about the main provisions of this act that any entrepreneur starting a firm in Singapore must be informed of.

Applicability Of The Singapore Employment Act

The rules of this act do not imply to a sole contractor who is appointed by the employer based on a fee to submit to finish a certain project for the firm. A sole contractor takes decisions and performs operations on his/her conditions.

Apart from that, below are mentioned some points which are not a part of this act:

The terms and conditions of those that do not come under this act are decided by coming on common grounds with their employer.

The contract of employment is a crucial official document of a firm as it describes the interaction between the employee and the employer. The basic principles of contract law are relevant to the employment contract. All the contracts are put into action by the law, and these define the worker’s wage information, future of work, rest days, overtime payment, and leaves.

There are certain promised benefits under the Singapore Employment Act. For example, maternity leaves, yearly paid leaves, paid leaves on public holidays, etc. Workers should make sure that they match all the needs mentioned in the act. There are certain provisions to which the recruiter should comply. Let’s find out what are those:

A worker should at least be of 13 years to be able to apply for the recruitment. But this can also differ based on his/her work type. For instance, a worker can’t employ individuals below 16 years of age in any work area which operates in a hazardous state that can be dangerous for the individual’s health.

As per the minimum wage of workers, there are no specific details on it in the act. The salary is based on the agreed decision that takes place between the employee and the employer.

Each employee gets at least one day off every week to rest without pay. The day of rest should preferably be a Sunday or any other weekday. If the recruiter is not able to provide a whole day off to the shift employee, the rest day for that worker should be of an uninterrupted period of 30 hours.

But this doesn’t imply that the recruiter can’t give any extra leave to its employees. A worker can ask for leaves that extend the official limit. But the recruiter can cut the worker’s salary for such off days.

A worker can take sick leaves, but only if the following conditions are met:

The number of sick leaves, just like annual offs, is also based on the employee’s service years in the firm.

Working mothers can seek paid maternity breaks underneath the Act, and young mothers can seek paid early childhood leaves when certain terms are fulfilled. To be eligible for such a sabbatical, a worker must have worked for at least three months. Furthermore, the baby for whom such advantages are provided by the company must be a Singaporean. These are only a handful of the requirements that a worker must meet.

The payment for overtime labor must be paid by the company 14 days after the completion of the payment period wherein the worker completed the job. Overtime pay must not be under 1.5 times the worker’s base hourly rate.

The Act of Retirement and Re-employment specify a statutory retirement age of 62 years. A company may not require most of its workers to retire before the age of 65. Workers who attain the age of retirement can also be employed again up until 65 years of age. Just Singapore nationals and legal residents, though, are entitled to re-employment.

The contract of employment should specify how either party may rescind the contract. Whether the hirer or the worker can end an agreement. When there isn’t any written agreement describing the termination method, the employment act’s termination rules apply.

The employment agreement can be dismissed with:

Finally, if any worker is caught and convicted of misbehavior (such as fraud, deceit, or carelessness), an investigation should be conducted, and the worker may be terminated as a result of the findings. The Act makes no provision for a process of investigation. As a rule of thumb, though, the company must:

According to the Act, the company may stop the worker from working for a total period of 7 days during the investigation procedure. If an employee thinks he or she has gotten wrongfully terminated, he or she may appeal the ruling with the officials in the Ministry of Manpower within 30 days of the termination.

Singapore is a nation that is known for being the best place for entrepreneurs to start a company. Great transparency and business reliability are two of its most appreciated factors. The nation of Singapore also has a strong political framework with a powerful judicial system and good business governance habits. All these reasons make Singapore the greatest business hub for investors from all around the globe.

If I start working as an employee in a Singapore-based firm, which public holidays will I be entitled to?

10 public holidays are granted to a worker providing service in a Singapore-based firm. They are:

Can a worker modify the provisions of the contract of employment whenever he/she wishes to?

This situation is only possible when both, the company and the workers mutually decide to do it.

Can a worker take a sick leave when working in a Singapore-based firm?

Yes, all employees are entitled to take sick leaves, but only when these conditions are met: